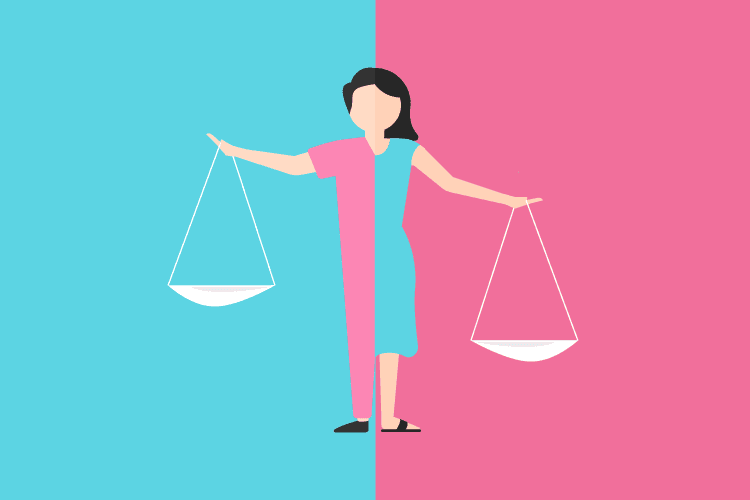 What Is Gender Equality In The Workplace?

Gender inequality is a pressing global problem, with half the world’s population struggling against both obvious and invisible barriers due to gender. While we’ve made meaningful progress in the last few decades, there is still a long way to go. As the United Nations Population Fund (UNPF) states, ‘gender equality remains an unfulfilled promise’.

International organisations take the gender issue very seriously. Gender equality is fifth of the UN’s seventeen sustainable development goals. Highlighting how large this problem continues to be, the UNPF sums up the problem thus:

In the workplace, gender equality means that there are broadly equal work and career outcomes for all, regardless of gender. This doesn’t necessarily mean that everyone should get exactly the same outcome; instead, that everyone has equal access to resources and opportunities.

We only need to look at the history of women in the workplace to see how much has changed. In the 1950s, only a third of women between 25 and 60 had to pay for jobs. It was common that once a woman was married, she was not allowed to return to the workplace.

In the 1970s, however, civil rights movements brought some big changes into motion. The most important of these included an equal minimum wage for men and women, the beginning of paid maternity leave, and government investment in childcare facilities.

Today, nearly two-thirds of women are in paid work. Despite this, women still earn significantly less than men over their lives. They retire with less money in their superannuation funds while living longer. Thanks to tough structural barriers, women make less progress in their careers than men typically do. And due to unfair access to family policies, men have less time to spend with their families while women are forced to take long breaks from the workplace, further affecting their future earnings and prospects.

For many people, growing up in modern society, it can appear that we have already achieved a state of equality. At first glance, women are educated, employed, able to choose their own life goals and then pursue them, free from the social constraints that used to limit them. Gender roles are less rigid than they were at times in the past.

Unfortunately, this is not the case for everyone. Some are lucky and will experience little disadvantage because of their gender. However, in various parts of Australian society, as in the wider world, outcomes for women and men are very different. Despite being one of the wealthiest developed nations in the world, Australia still only ranks 48th in the world for the representation of women in politics – falling from 32nd in 2006. Across the board, women earn, on average, 21.3% less than their male counterparts. That’s $25,717 a year. To think about it another way, Australian women must work an additional 56 days each year to earn the same pay as men doing the same work.

[In 2017-2018] the gender pay gap continued its downward trend, which is great. However, men still out-earn women, on average, by 21.3%. Pay gaps persist in every industry, occupation and manager category.

There’s a sizeable gap between women’s and men’s perceptions of equality in the workplace. In the Women and the Future of Work Report, researchers at the University of Sydney surveyed over 2,000 women and 500 men in the 16-40 age bracket. Only a third of the women felt that the sexes were treated equally at work, compared with half of the men. This accords with many women’s sentiment that men do not notice gendered discrimination.

“I think (men) were oblivious … I don’t think they even care to think about it.”

“There’s not a whole lot they can do … because the manager will just deny it and said [sic] that he is giving everyone equal shifts or whatever.”

Beyond the Gender Pay Gap

“I think a lot of people like to pretend they have equality within the legal industry and I think there certainly isn’t … I’ve had experiences at a very basic level where a magistrate said to me ‘prove to me you’re more than blonde hair and blue eyes’ … you find that a lot of the females were at the lower level and they kind of just stop. The crown prosecutors and all the higher benchmen were all males because they haven’t had the inconvenience of maternity leave to stop them from going up.”

Women also discussed having experienced gender-based discrimination such as ‘being belittled or singled out for their physical appearance’, as well as the structural barriers that prevent women from advancing in their careers.

The Australian workforce is divided by gender. According to the Australian Human Rights Commission, women are over-represented in undervalued industries such as health, community services, childcare and aged care. They are also disproportionately found in low-paid industries, insecure work and employed on a part-time basis. Women are dramatically under-represented in leadership positions. Further, on average 10% of women surveyed said they had been sexually harassed at work, that number rising to 18% for women in vulnerable groups, such as those with disabilities.

‘It’s a really male-dominated industry and they just don’t take you seriously. And you get hit on all the time.”

For all the laws we’ve passed and the progress we’ve made, the hard reality is that our daughters face the prospect of earning 15 per cent less over their lifetime, having fewer advantageous career opportunities and have less financial security (particularly in retirement) than our sons.

So yes, we’ve come a long way, but we shouldn’t pat ourselves on the back just yet.

Family responsibilities play a crucial part in the gender imbalances in the workplace. According to the Australian Human Rights Commission, 90% of men and women believe that men should participate equally in parenting. Yet fathers, and especially young fathers are much more likely to have requests for workplace flexibility arrangements and paid parental leave denied. This hurts men and women; men are unable to be involved in family life to the degree that they want, and the burden of unpaid caring duties falls to women by default. Australian women account for 70% of primary unpaid carers for children and spend almost double the amount of time each day performing unpaid care work than men.

Having a family has flow-on effects for women after they return to work. The pay gap is due to lower rates of pay for women (11% less for full-time, non-managerial employees), but it’s also due to women working fewer hours. This becomes especially pronounced when children are added to the equation. Two out of three women in their early 30s have children, yet only one in five works full-time. Because they work fewer hours while raising children, women have less experience in the workforce. As a result, they are less rewarded with promotions and pay rises. It becomes a vicious cycle. However, things are gradually changing on this front.

The number of women who are staying on at work after having children rose to 10% in 2018. They are choosing maternity leave and then returning to work, rather than choosing to quit their jobs. This is largely thanks to policy reforms starting in 2008, such as the Child Care Subsidy increases, which also increased once more in mid-2018.

of primary unpaid carers for children

of women stay on at work after having children, instead of quitting their jobs.

What Does The Future Hold?

It’s not all bleak – there are some positive developments afoot, albeit slow ones. Promotions for women are on the rise, according to the Workplace Gender Equality Agency (WGEA) Scorecard. In 2017-2018, 43.3% of manager appointments went to women. Employers are increasingly supporting flexible work arrangements, up from 68% to 70%, and analysing pay equity more than ever, up 4%.

Despite these encouraging shifts, the gender imbalance remains stagnant at the top, with only 17% of CEOs and 25% board representatives being female. These figures have barely increased from the previous years, and under a third of employers have actually put targets in place for gender equality outcomes.

For better outcomes, more change is needed. And that includes economic outcomes. According to the Workplace Gender Equality Agency, “Achieving gender equality is important for workplaces not only because it is ‘fair’ and ‘the right thing to do,’ but because it is also linked to a country’s overall economic performance.”

When we achieve greater gender equality, there are positive results for the industry, including:

The status quo must change faster than it has done. Gender equality will happen, sooner or later. Whether we waste a staggering amount of talent and economic growth in the meantime will depend on how quickly businesses and governments move toward a fairer workplace for all.

Australian workplaces need to pick up the pace.

If we want a world in which our daughters truly have the same possibilities and opportunities as our sons, we have more to do.

So what should businesses aim for when promoting gender equality? The Workplace Gender Equality Agency lays out the following aims for equality in the workplace.

Employers pay the same amount for the same work, or work of similar value.

Employers remove all barriers that prevent women from participating equally in the workplace.

Workplaces provide access to all industries and occupations, including leadership positions, for all genders.

How to Ace an Aged Care Job Interview

Got an aged care job interview lined up? Learn how to prepare and show the hiring manager you're a g...

Want to know how to create your own perfect Gaddie pitch? These step-by-step instructions will ensur...

Jobs Where You Can Help People Who Are in Dangerous Situations

With job satisfaction high on the agenda , we take a deep-dive into two essential and meaningful car...